Authentic Yukimura-ryû training by licensed instructors is being offered in Japan, Germany, and Switzerland. The teachings of the “caressing style of kinbaku” are based on a structured approach, a kyû-system complete with exams to certify the progress of each student. This system allows for an authentic transmission of the increasingly complicated and intricate techniques passed down by kinbaku grandmaster Yukimura Haruki (雪村春樹).

Osada Steve has been covering Yukimura Haruki’s live performances and filming activities since 1999 and was accepted as sensei’s first formal student in 2006. He received his bakushi name Harumine (春嶺) in 2009 and his teaching license in 2012. In 2014 and 2015 Osada Steve was the main character in two videos produced and directed by Yukimura sensei: Bakushiden (縛師伝) and Nawa (縄).

Harukumo started studying under Yukimura Haruki in 2010 and received his teaching license in 2014. During his training, he also served as sensei’s interpreter for foreign students and at Yukimura sensei’s workshops abroad. 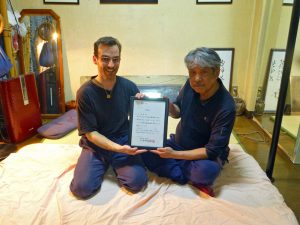 He helped Yukimura sensei to systematize the techniques, laying the foundation for the Yukimura-ryû kyû system. Today, students from all over the world can receive instruction of Yukimura-ryû at the Harukumo Juku in Switzerland.

Harukumi’s approach focuses on subtle emotional exchange and intimate interaction between bakushi and ukete. The rope is used in a minimalistic and reduced way to increase focus and strengthen nonverbal communication. Physical interaction is also reduced to maximize the impact of every gesture, touch, and action.

Using a structured system to train these subtle skills helps students to grasp the full complexity of Yukimura-ryû. The aesthetics and skills required are broken down into micro units to guide students through the entire universe of Yukimura-ryû, starting with the basic concepts and advancing to more complicated aspects over time.

Yukimura-ryû is not about creating rope patterns but about the heart put into the act of tying. The connection and intricate communication between the partners is the main center of attention. Elegant poses emphasize natural beauty and enhance the perception of the rope partners at the same time. 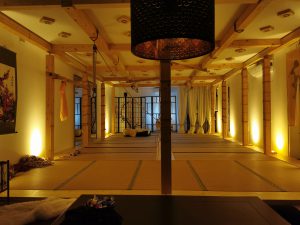 The Juku is not only a place for training. Shibari lives and breathes, and the Juku offers an intimate and personal experience to shibari lovers to explore and find their own ways to connect through rope. The Juku offers eight tying spaces plus a lounge area. The coziness and intimacy created by Harukumo and his wife Yoko add to the peaceful atmosphere. The design was inspired by Studio SIX, the K2 Salon, and of course the studio of Yukimura sensei himself.

Harukumo believes that the environment has an influence on how we feel and how we perceive. The Juku is meant to create the atmosphere of a traditional Japanese house in the countryside, to offer a space to fully detach from everyday life and focus on the beauty of kinbaku.

Ropeknight started studying under Yukimura Haruki in 2013 and received his teaching license in 2015. He is available for teaching authentic Yukimura-ryu at his dojo in Koenigswinter (near Cologne).